O·Neh·Da Vineyard and the surrounding Hemlock Hills have a long and sacred history dating back centuries, to when the native people hunted, fished, and farmed here. 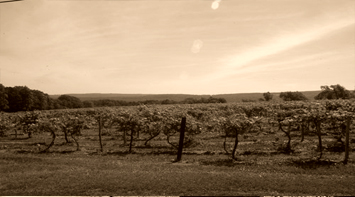 The Seneca Nation, the ‘Keepers of the Western Door” of the Finger Lakes, inspired the naming of the Vineyard.  Bishop McQuaid chose the name O·Neh·Da to respect the native given name for Hemlock Lake.  All 11 of the Finger Lakes have Native American names, save Hemlock Lake which was named by European settlers to celebrate the majestic hemlock trees found gracing the deep and shaded gorges around Hemlock Lake.

Bishop McQuaid’s vision for O-Neh-Da was to plant his own vineyards to ensure a premium source of sacramental wine for his churches.  As he directed the planting of the grapes, McQuaid made Hemlock Lake his second home.  He often travelled by steamboat down the Lake to his cottage to inspect the vines and oversee operations.

The Vineyard prospered and McQuaid’s vision was fulfilled.  When the City of Rochester acquired the lakeshore and nearby hills

for a reservoir and water supply, McQuaid was allowed to maintain the Vineyard and his cottage, while all others were torn down.  Hemlock Lake and the surrounding hills and gorges returned to their natural state, creating a pristine watershed and nature preserve that endures to this day.

Upon the Bishop’s death, the Diocese of Rochester briefly ran the Vineyard before attracting the Society of the Divine Word, a Dutch Missionary order. Finding a place of bucolic tranquility and beauty, the SVD as they were called, commenced the construction of a seminary to train novitiates for mission work abroad. With the onset of Prohibition, it was decided to cease winery operations, although the cultivation of some vineyards continued.  Sacramental wine producers were permitted to continue making wine during Prohibition, but it was not until 1934, after Repeal, that the winery reopened and was revitalized with an influx of new seminarians.

A German born winemaker was retained and began the work of replanting the vineyards and restoring the wine cellar. O·Neh·Da thrived and became the trusted and approved brand it is today.  The Society of the Divine Word maintained control of the Vineyard until the late 1960’s.  Decreasing vocations and increasing costs forced the Society to look for new management of the Vineyard.  Through the 1970’s and 1980’s the Society leased the operations to a California wine-making family of great reputation, who continued production of sacramental wine in full accord with Canon Law.

Today, O-Neh-Da Vineyard is privately owned and operates sustainably to remain faithful to McQuaid’s founding mission.  Grapes grown on Hemlock Lake and throughout the Finger Lakes are used in the making of premium authentic sacramental wine for churches in New York State and throughout the world.  Faithful to McQuaid’s vision, O-Neh-Da Vineyard remains totally dedicated to producing a valid and licit sacramental wine, absolutely pure and 100% “of the grape.”
O·Neh·Da is one of the last sacramental wineries left in the world who produce their own wine from local grapes. With a winemaking team that has been together for over 25 years, premium quality is assured.  Each wine is individually handcrafted from the best grapes, grown throughout the renowned Finger Lakes Wine Region. Unlike competitors who bulk process their wine, adding non-grape sugars and other adulterants, O-Neh-Da produces only authentic, pure grape sacramental wine. Because of this unwavering commitment to premium quality, O-Neh-Da Vineyard has maintained continuous Approbation from the Bishop of Rochester since our founding in 1872.
Font Resize